As part of the KoresponDance 2017 festival in the grounds of the baroque estate of Žďár nad Sázavou in the Czech Republic an audio reactive visual installation to accompany the concert performance of renowned French countertenor Sébastien Fournier accompanied by the Sprezzatura choir. 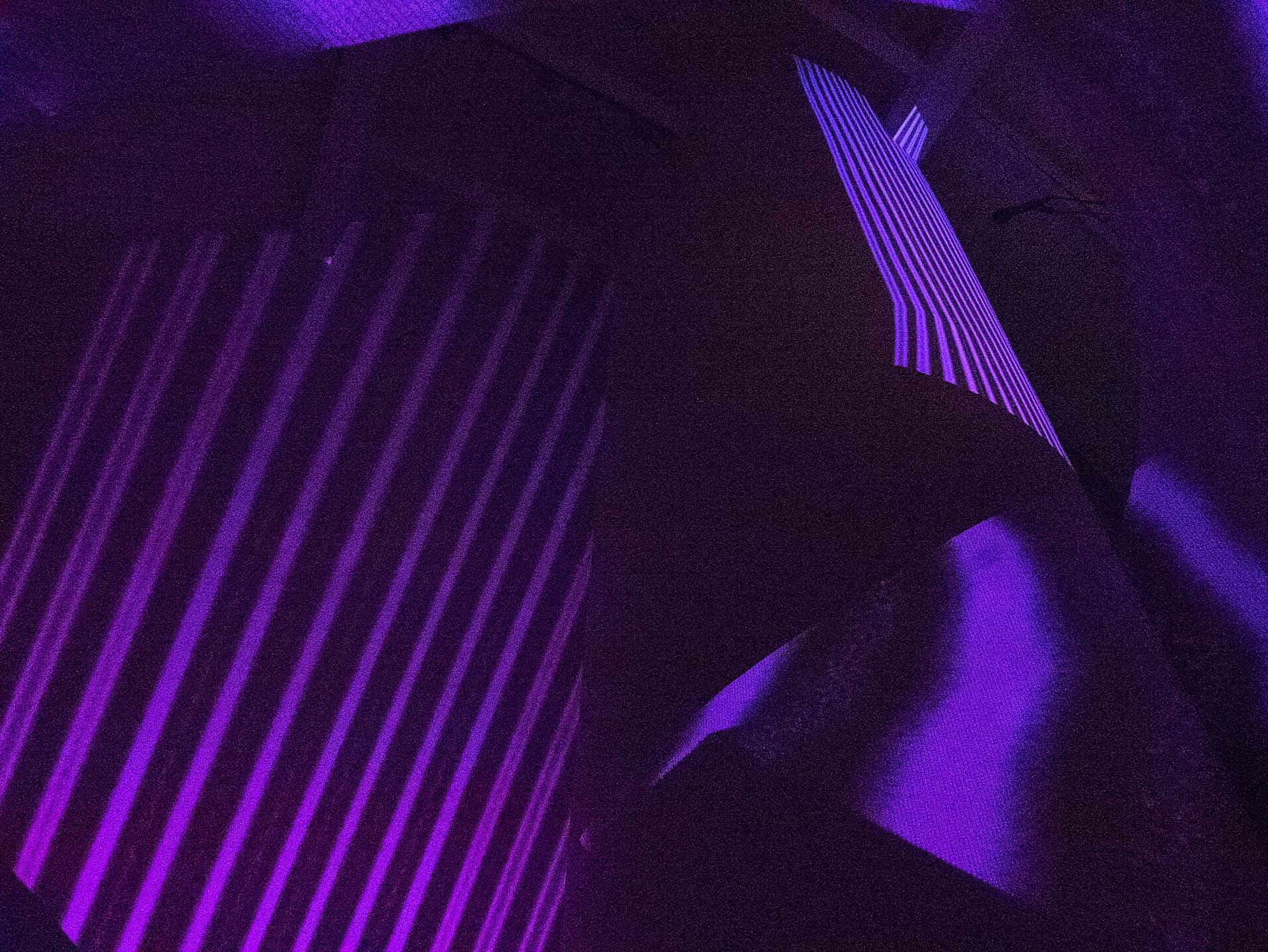 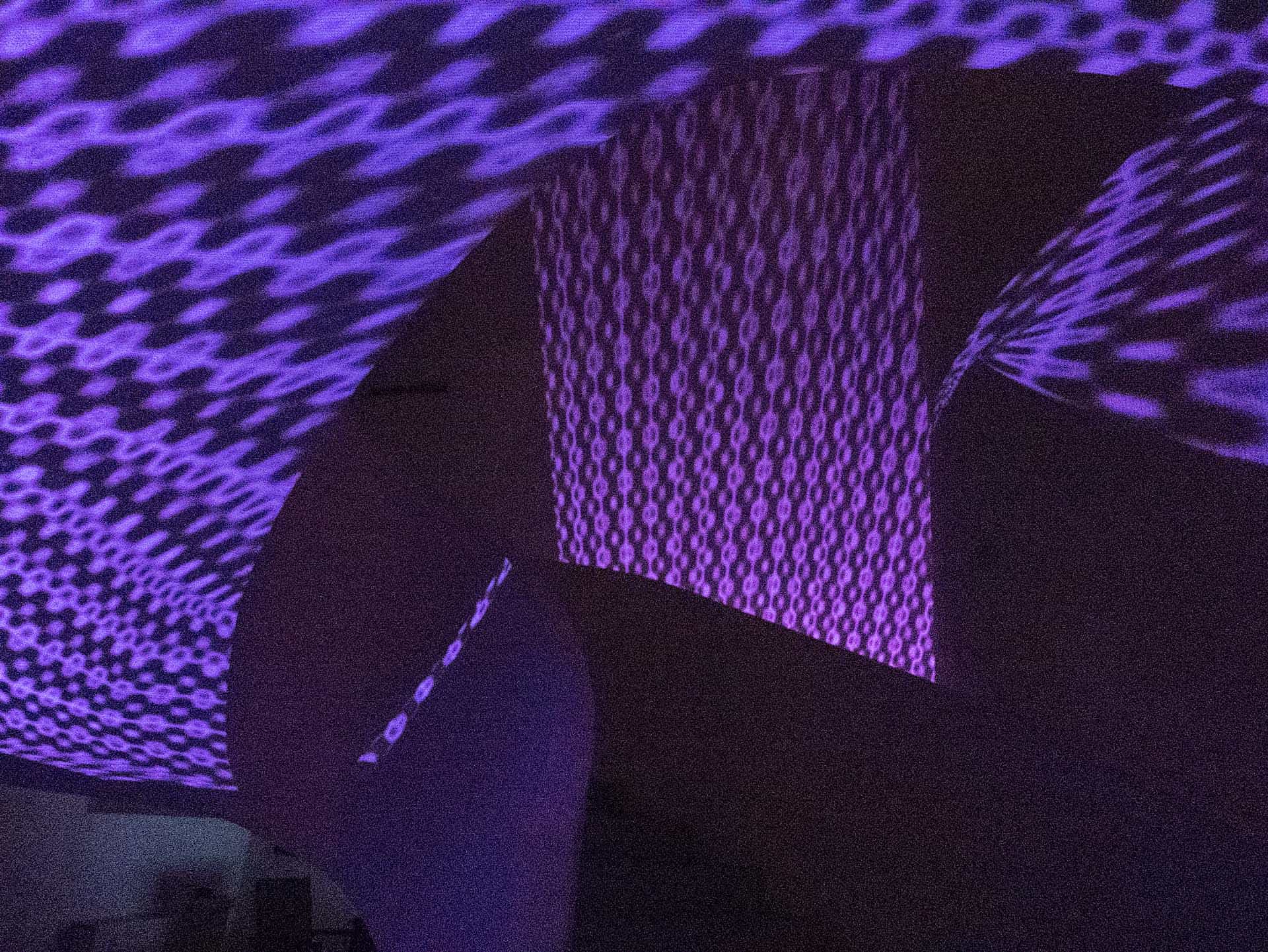 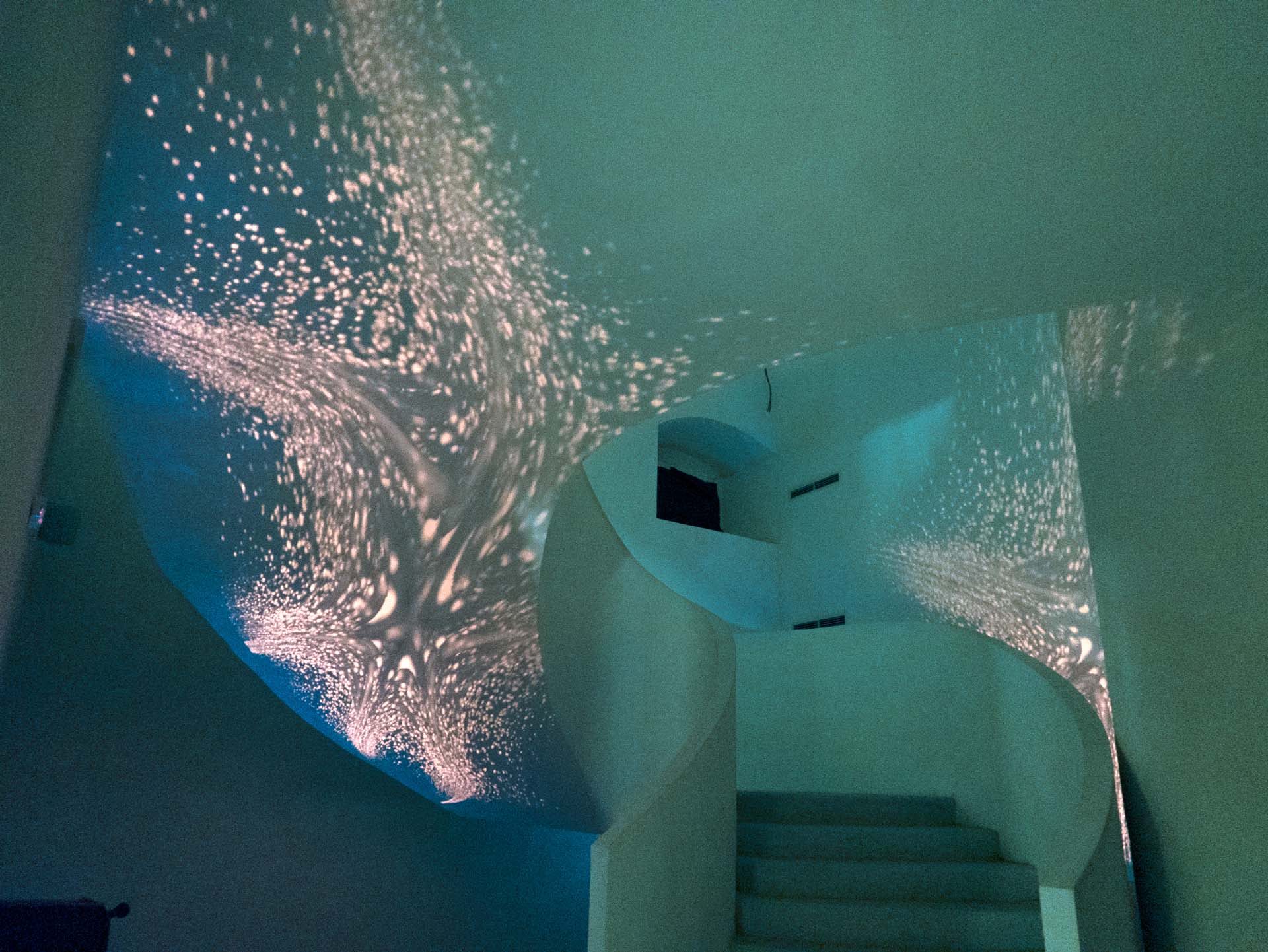 For the 15th anniversary of Festival Pecka an installation and dance performance within the ruined walls of Pecka Castle (Hrad Pecka) poetically interpreting the journeys of former resident and renaissance Bohemian nobleman Kryštof Harant. Apart from speaking 7 languages, a singer, instrumentalist, composer and artillery officer, Harant undertook a two year pilgrimage to the Holy Land in 1598/99 about which he wrote and illustrated the 800+ page book  Journey from Bohemia to the Holy Land, by way of Venice and the Sea published in 1608.  Kryštof Harant was murdered by the Habsburgs at a public execution in Prague in 1621.

The purposefully naive and playful animations used in the installation are directly drawn from the beautiful – and sometimes fantastical – woodcuts produced by Harant that illustrate the book of his journey.  Music for the performance includes two pieces composed by Harant. 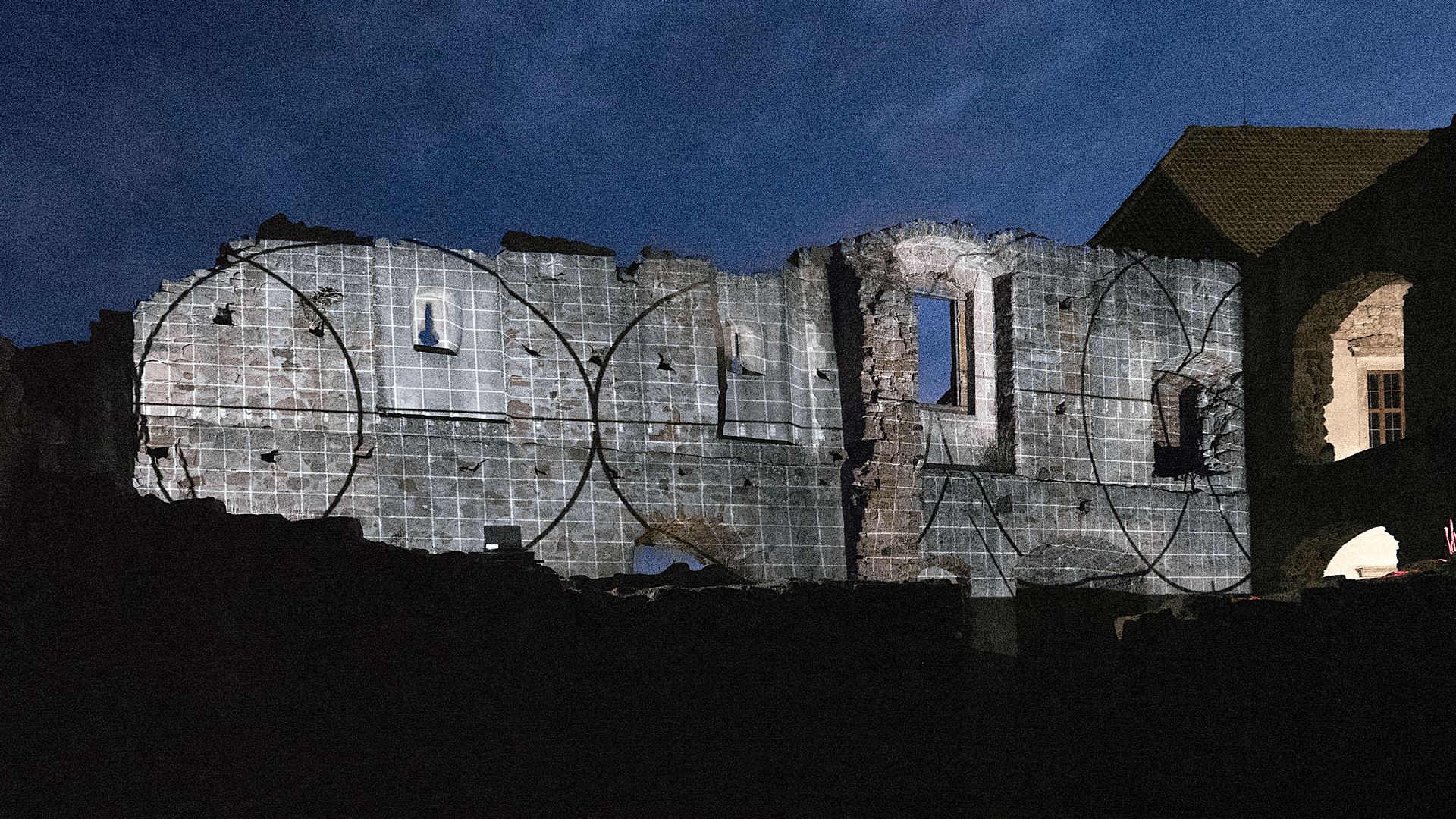 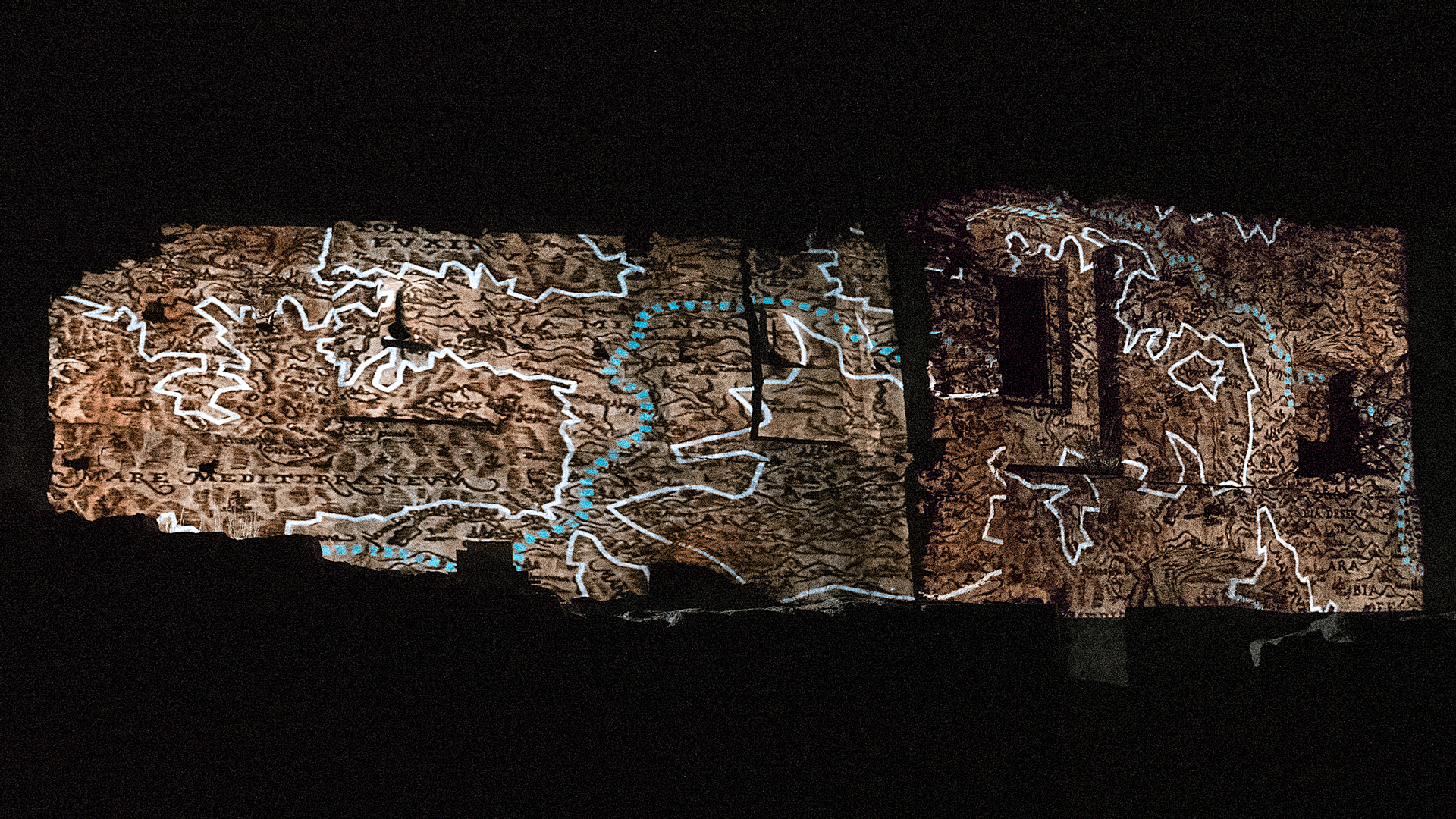 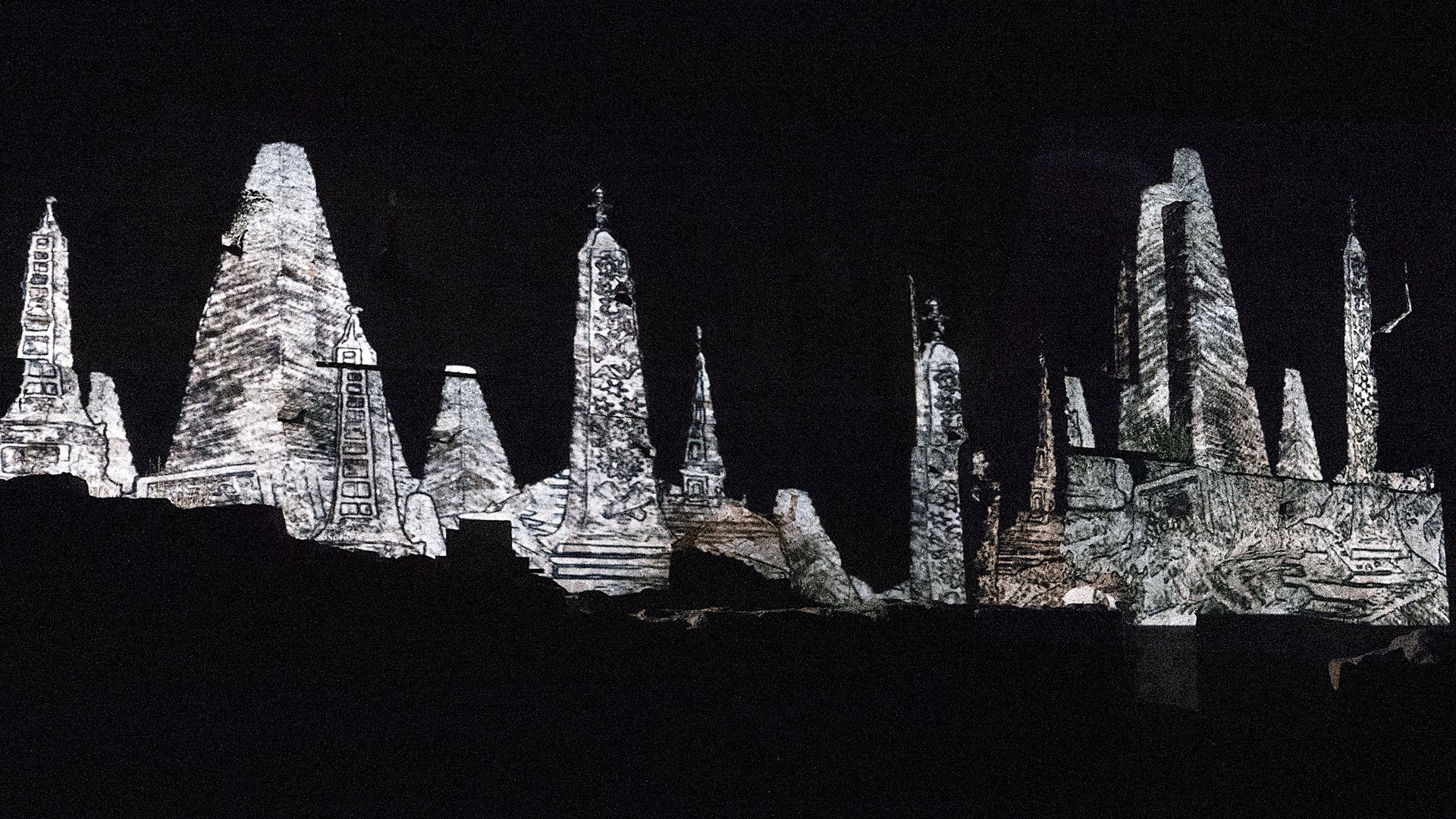 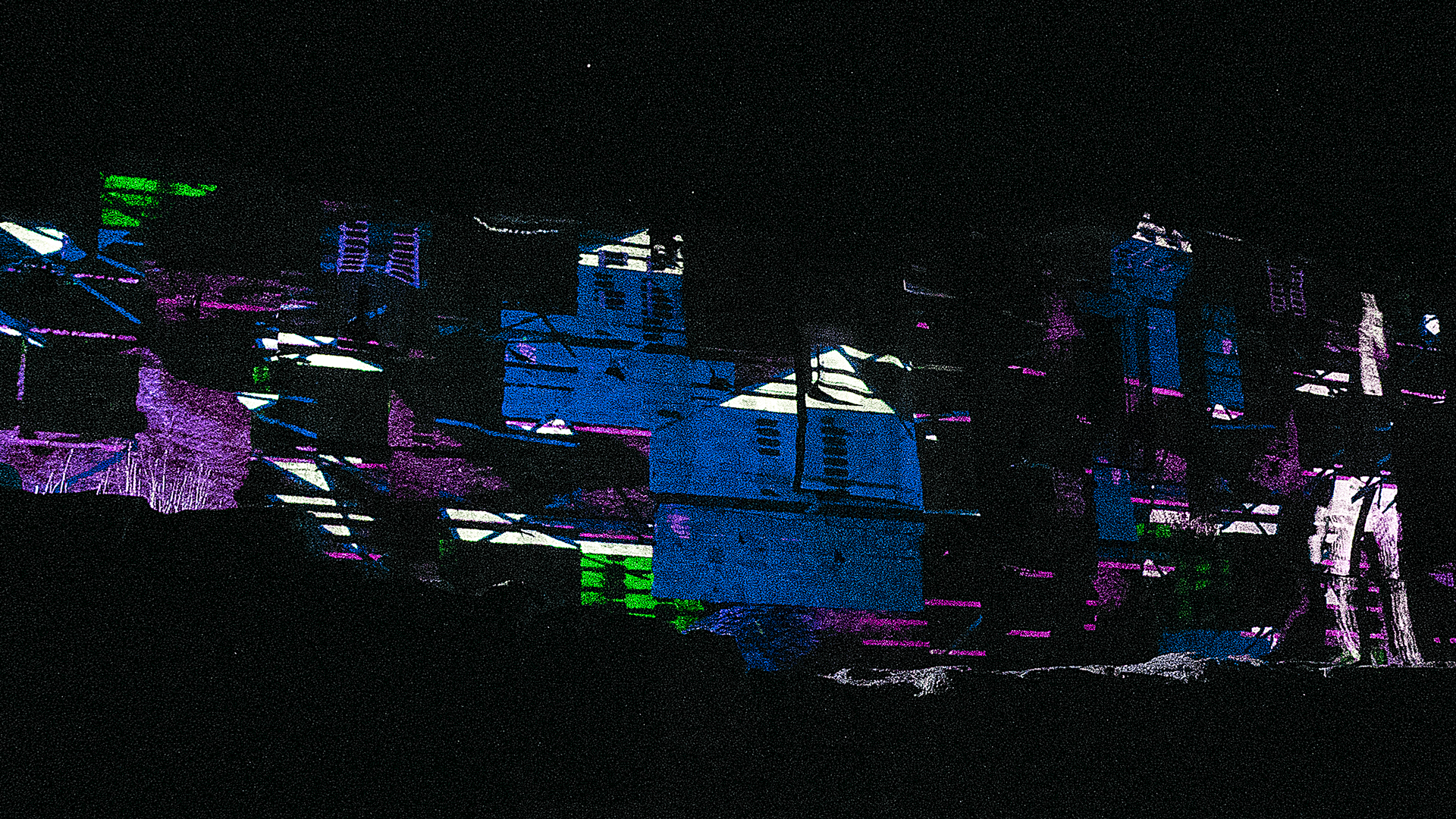 A visual installation in the former transmission tower of Danish Radio in Copenhagen – now the home of the Royal Danish Academy of Music – accompanied by a synchronised streamed Internet Radio broadcast. The music is an original composition evolving from the original Danish Radio pause signal Drømde mik en drøm i nat (I dreamt a dream last night).

Until Danish Radio vacated the building the pause signal was originally played live on air by a device from 1931, something best described as a miniature automated glockenspiel. 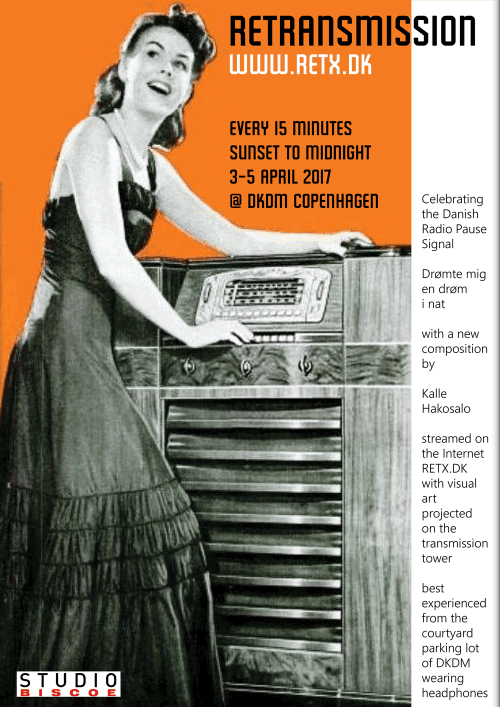 Promotional poster for ReTransmission and the event website retx.dk 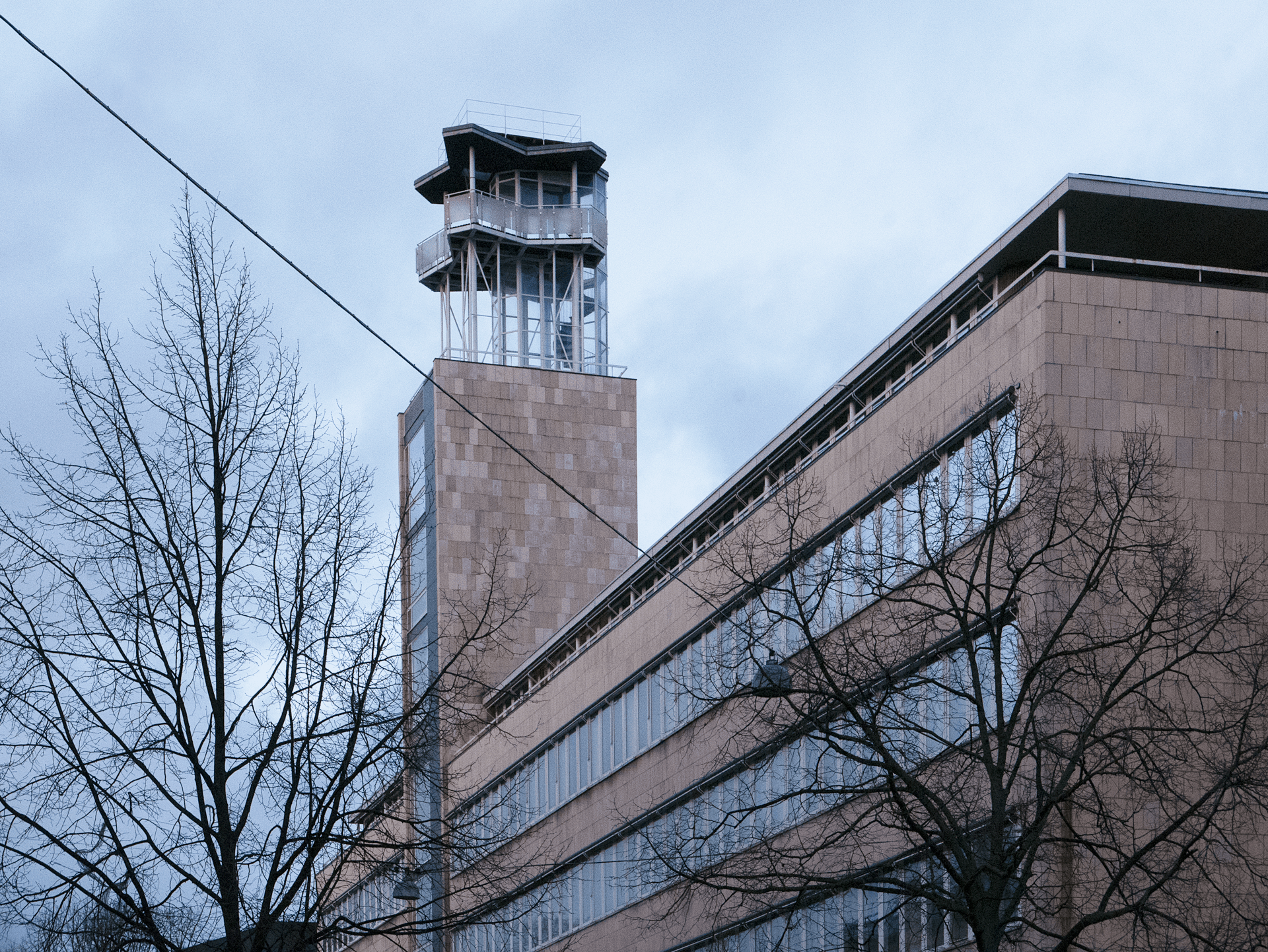 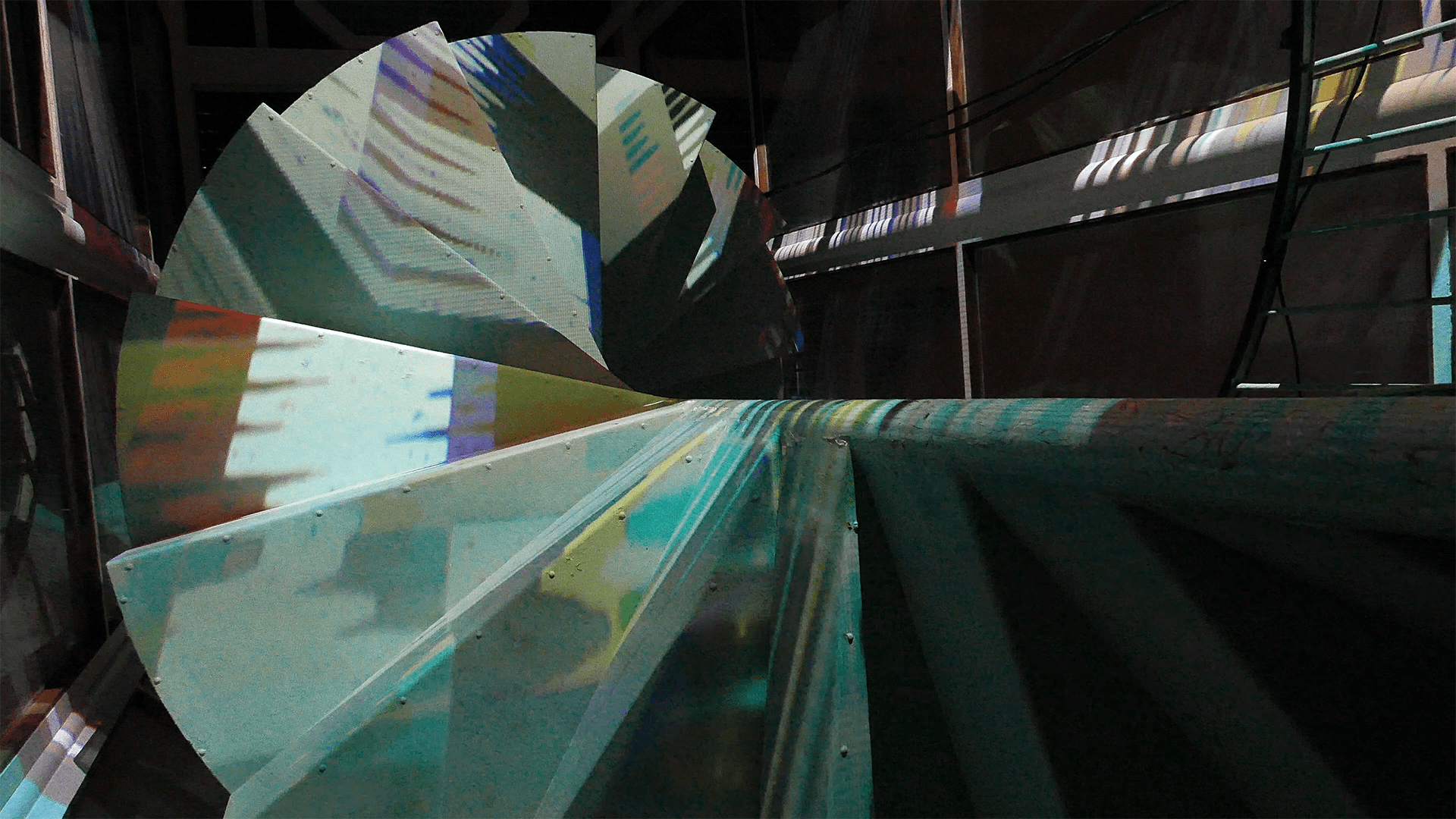 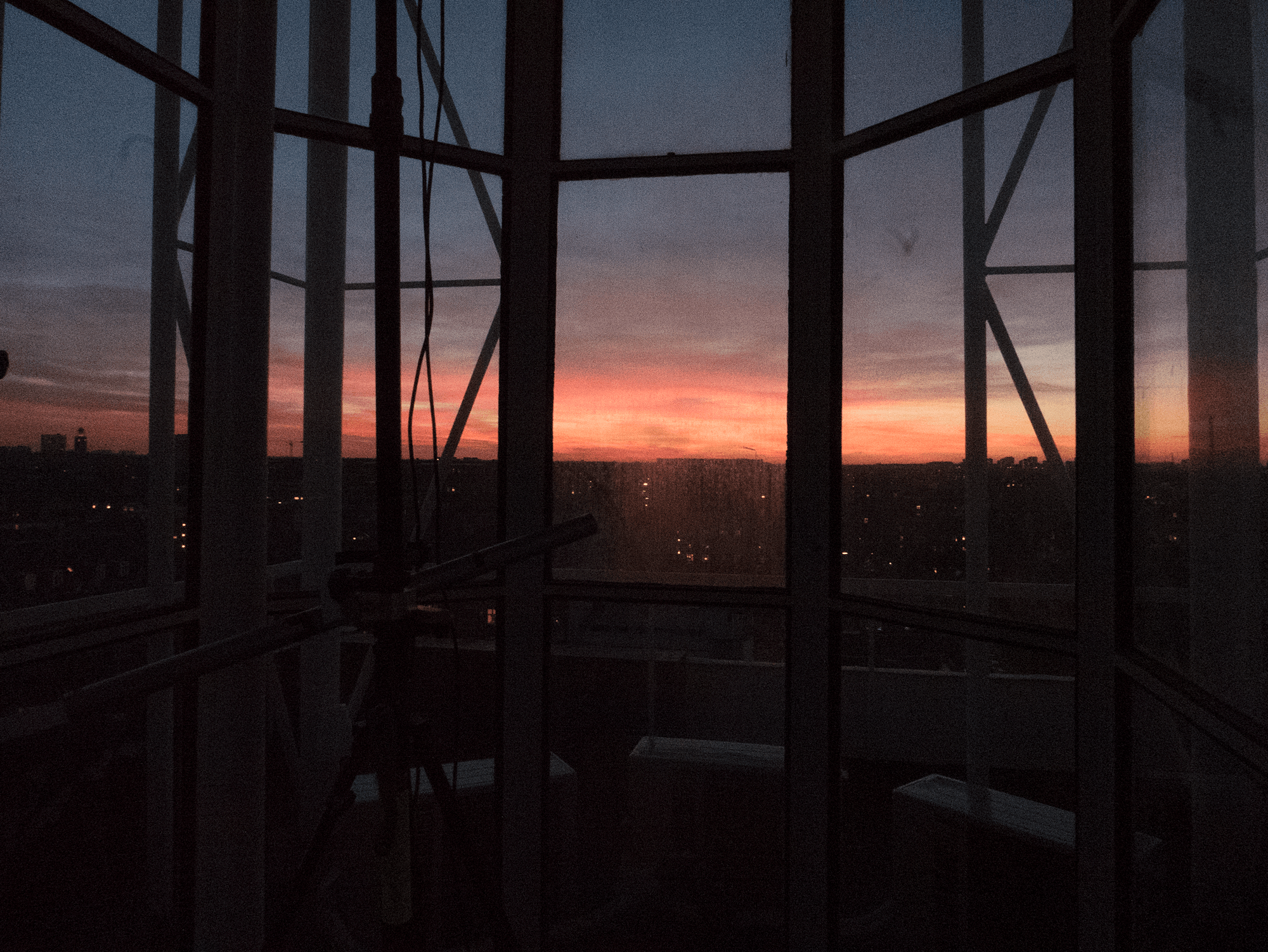 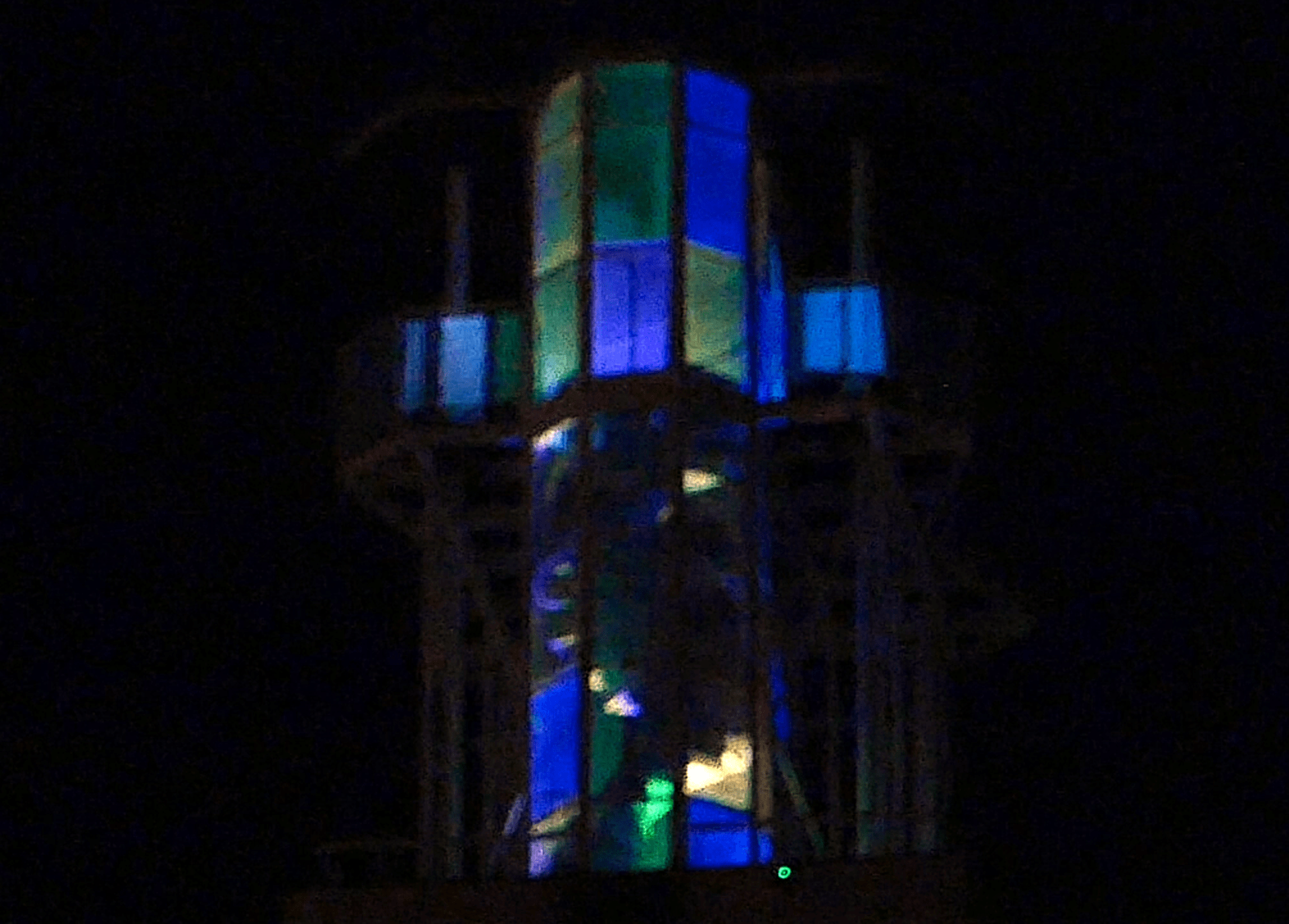 January 2017 – a series of landscape installations illuminating remote areas of Andalucia connected with the storage and supply of water to cities many kilometers away.  The live installation work in this series investigates the juxtaposition of man’s interventions and the underlying landscape.  It also looks to reveal the hidden workings and effects of these interventions which would normally be unseen or realised by the casual visitor.

As no electrical supply is available in these locations all equipment (projectors, computers, lighting, workstations) were powered by solar energy collected on site during the period of the installation development and operation.

It Comes and Goes (with Titia Bouwmeester)

As part of a series of projects commissioned by Cornish production company Golden Tree, with support from the National Trust and University of Exeter, Dutch artist Titia Bouwmeester was asked to investigate the rhythms of the  changing coastline in the area of Godrevey, Cornwall.

Working in a small and challenging farm barn, StudioBiscoe worked with Titia to develop a multi-projector installation that portrayed in a 24 minute timed presentation the 24-hours of Godrevey that she had captured on film during her several week residency on site in and around Godrevey.  The installation comprised 3 main screens on one wall of the barn (a video diptych or triptych as the work unveiled during the 24 minutes duration) with additional projectors mapping the roof of the barn and side walls at key points during the showing.  The video installation was synchronised with a soundtrack  especially produced for the installation.

For the second outing of the Inland Art Festival in Reduth, Cornwall a video installation capturing a key movement of the complex heritage of what was once the world’s richest mining district, employing it as a metaphor for moving forward with new industry and life in the 21st century but with a population happy to remember and explore its own rich history.

Man Engine Moving symbolically employs the mechanism employed by miners used to reach the tin below Redruth. The Man Engine was an ingenious method to travel below but one that was inherently dangerous as can be recalled from the nearby disaster at Levant mine in 1919, abstractly depicted in Peter Lanyon’s 1953 work St. Just.

The installation was presented as a large scale projection mapping (using 5 projectors) of the underside of one of the massive arches of the 61ft (18.5m) high Redruth viaduct on the Penzance to London main line railway.  Video, paintings and animations were blended and mixed with real time animation and live drawing from a stage underneath the viaduct.

Thanks to Inland Art Festival and Arts Council England for supporting the work, to David Prior for sounds of Cornish mining, and to all at Charlie’s Bar in Redruth. 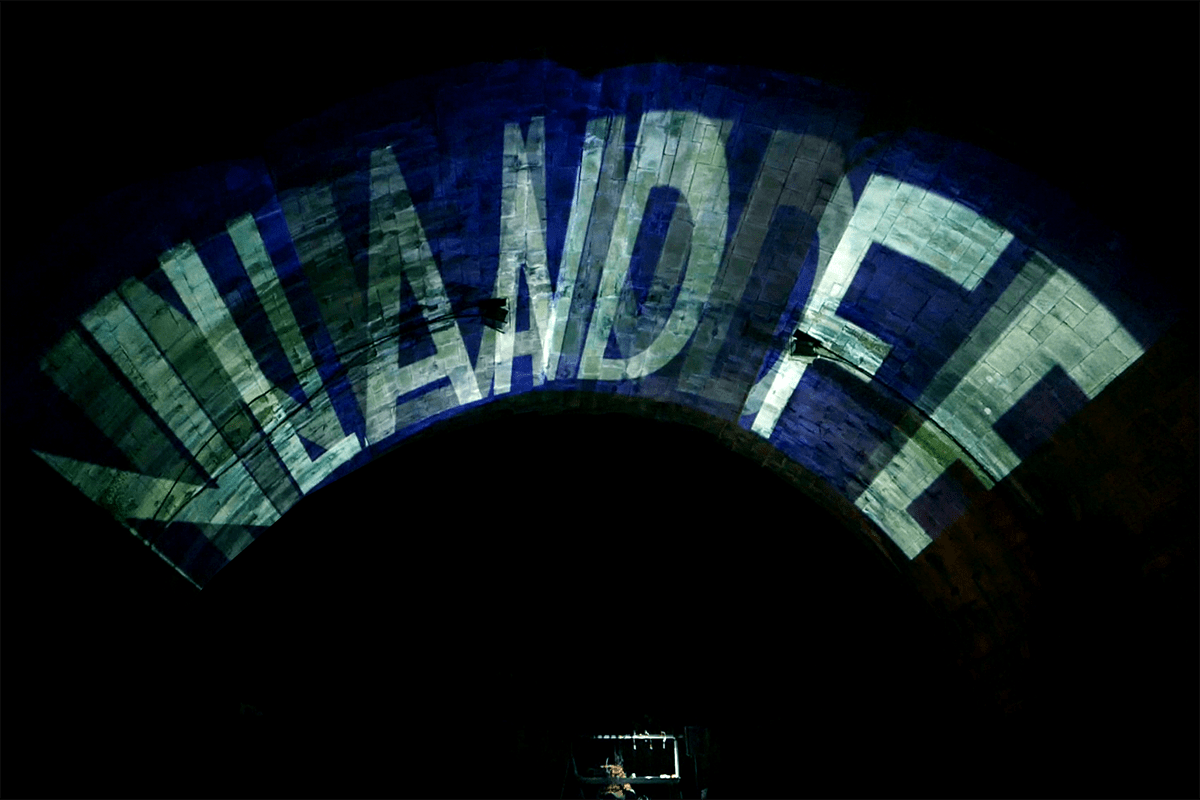 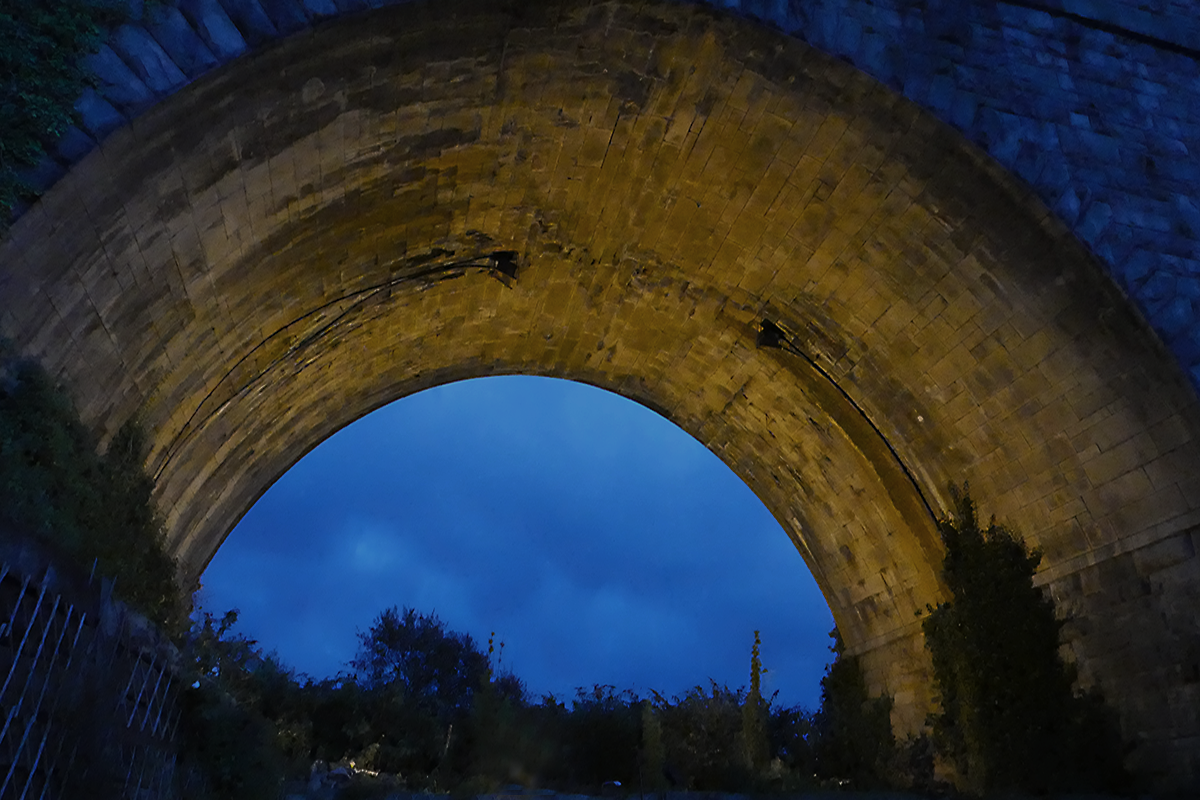 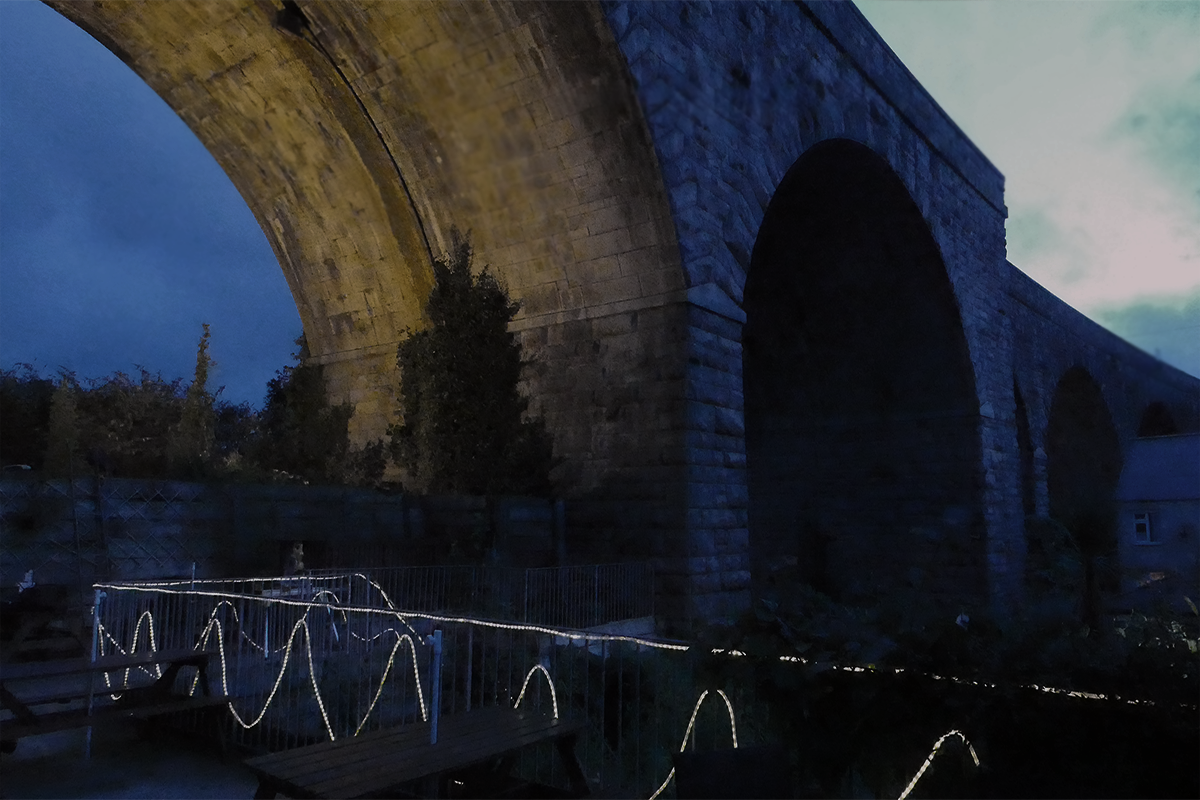 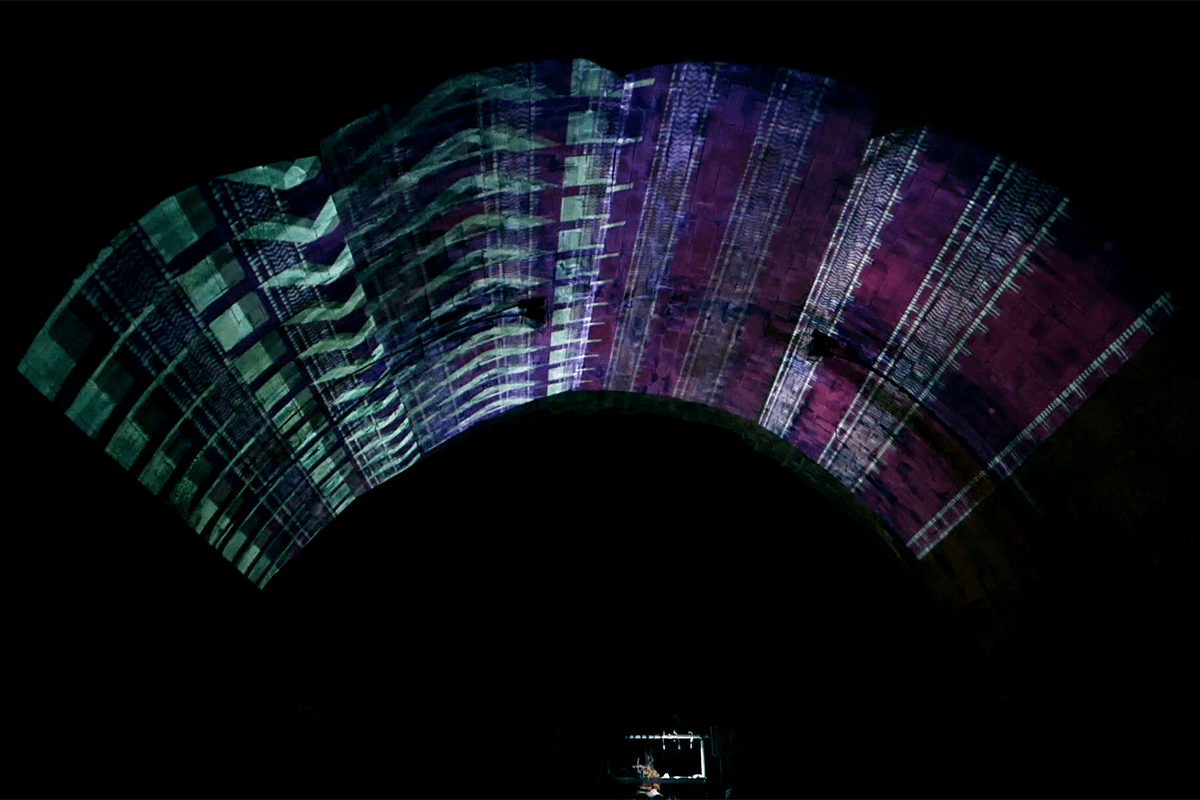 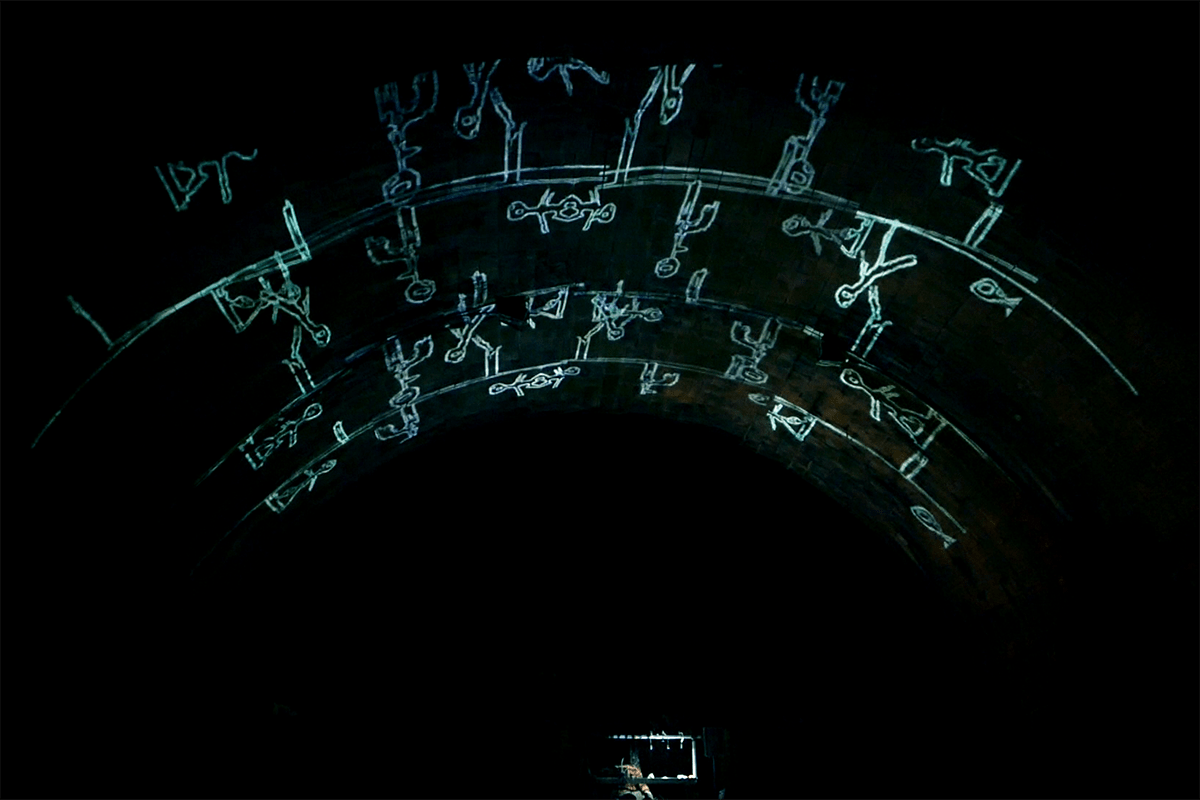 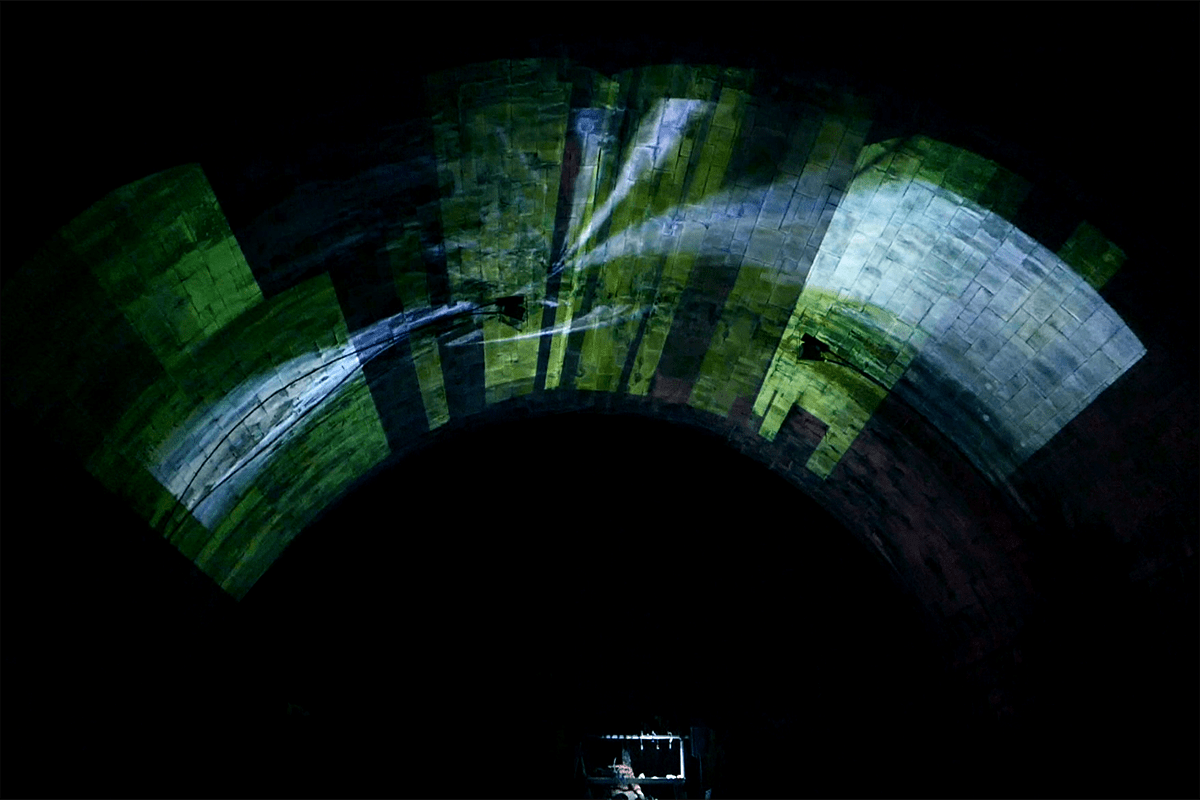 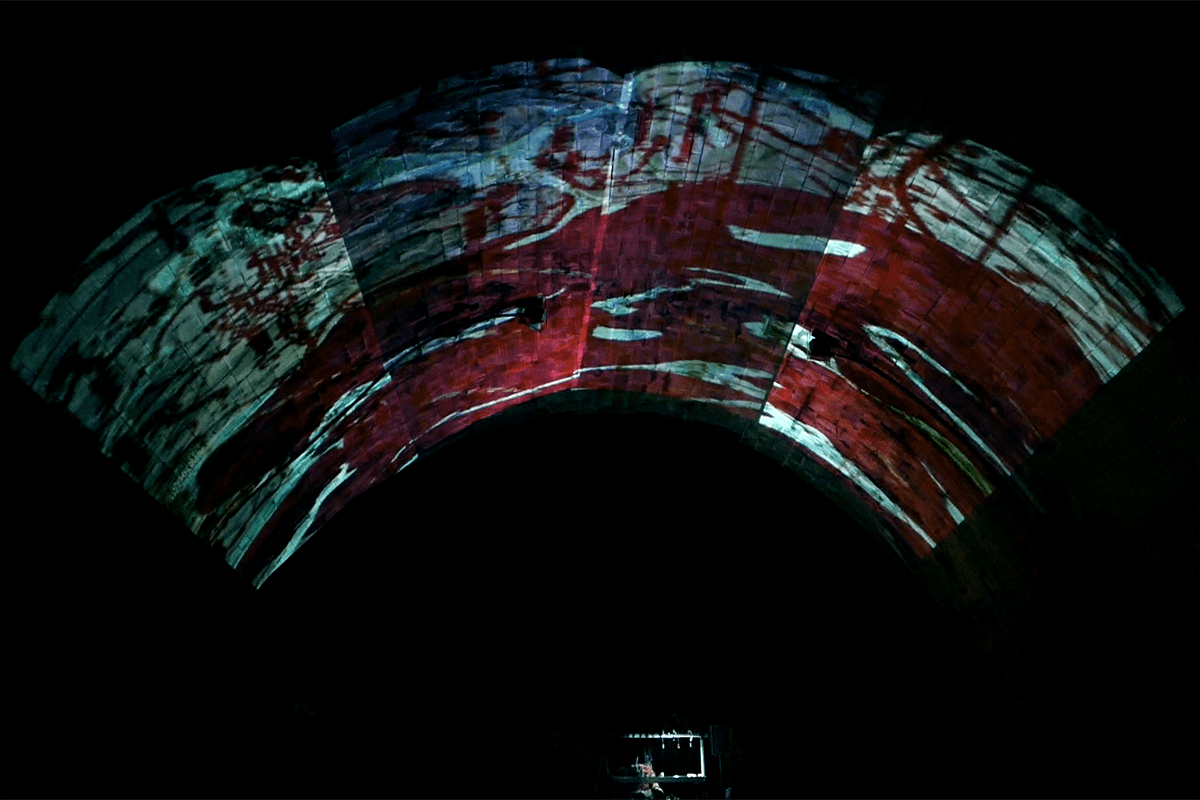 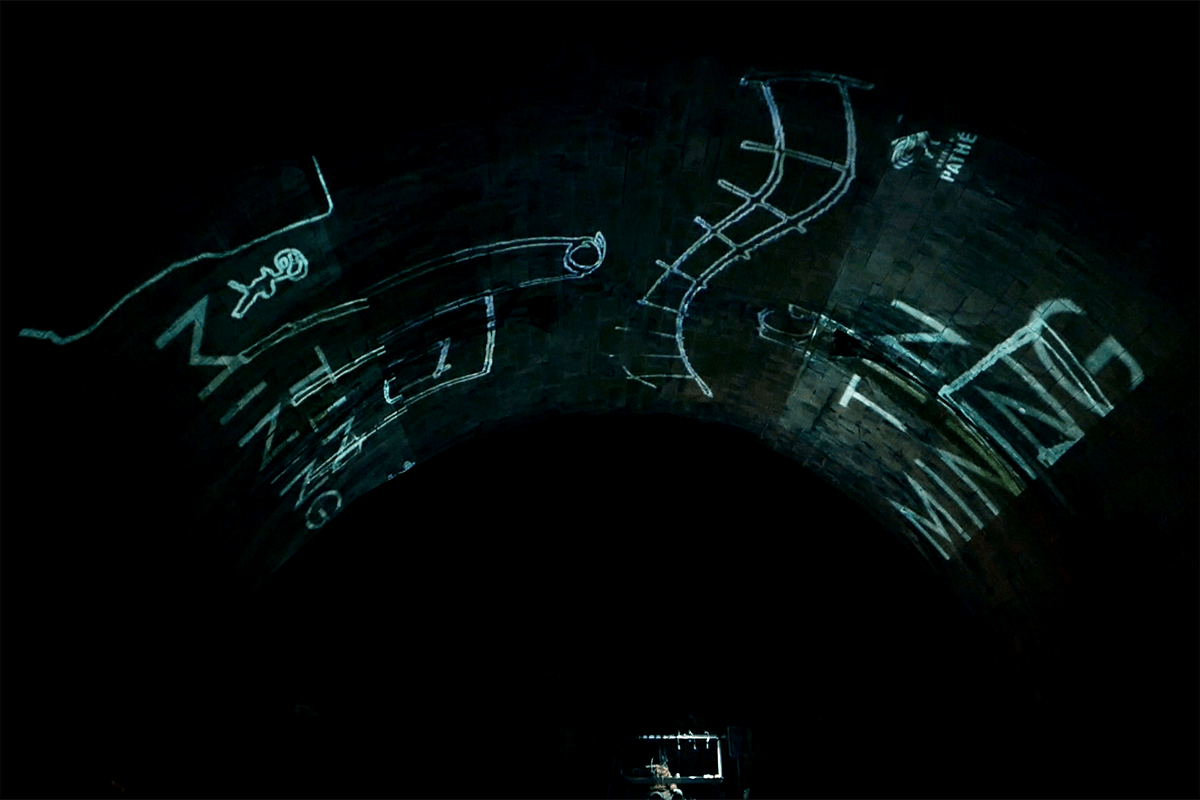 Projection design, installation and mapping to support a one off contemporary dance event choreographed by Grace Clayton.

The Garden of Collected Consciousness

An exploration of what people individually think in a a real walled garden and a confidential sharing of those same thoughts in a virtual garden created with projection mapping, surround sound and mobile applications (developed with Lucy Frears).